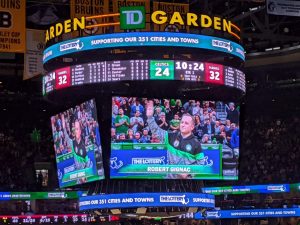 Our house recently took center court at the Boston Celtics’ house, bringing the house down as the crowd learned of the efforts at Megan’s House.

During the 2nd Quarter of the Celtics January 3, 2020 game against the Atlanta Hawks, Robert Gignac was honored for his work in the fight against addiction.

The Megan House Foundation’s Chairman of the Board was selected as one of the Celtics “Heroes Among Us,” an award presented to individuals who, through their unique commitment and humanitarian spirit, have made exceptional and lasting contributions to the community. At every home game, the Celtics and their fans salute the exemplary efforts of these citizens during a special in-game presentation on the legendary parquet floor. 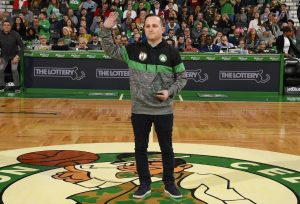 As the youngest official ever elected in the city of Lowell’s history, a then 21-year old Gignac was an integral part of instituting opiate prevention and awareness programs through the Lowell Public Schools.

As Chairman of the Board at the Megan House Foundation, he has been a passionate advocate for the residents and the programs, helping the organization garner local and national acclaim.

The Megan House Foundation congratulates Gignac on this prestigious honor and thanks the Boston Celtics for recognizing the tremendous work he, and our team, do in helping combat the opioid crisis.